The position of the morning sun in the sky in October makes it about the best month of the year to photograph the tigers at the San Diego Zoo.  Here are a few images of the Malayan Tigers from Saturday, October 28, 2017.

Here's something a bit different - Cinta and Berani playing at the edge of the pond.

Click here if you would like to see a few more.
Posted by Frank B. Baiamonte at 11:16 PM No comments:

Here are few images of Cinta, one of the Malayan Tigers at the San Diego Zoo from Saturday, October 21, 2017.

Click here if you would like to see more images of the Malayan Tigers at the San Diego Zoo on October 21.

It's the pictures that are older, not the tigers - they're fairly young.  I took these back in March of 2009, several months before I started this blog.  At that time there were three young Malayan Tiger cubs at the San Diego Zoo - two females Jin and Seri, and their brother Menderu (and I'm not so sure about the spelling).

One day two of them (probably Jin and Seri) found something to play with, and took it over to a log that used to be perched fairly high above a part of the big pond.

They played with it for a while, and then it slipped out of their grasp and fell into the pond below. 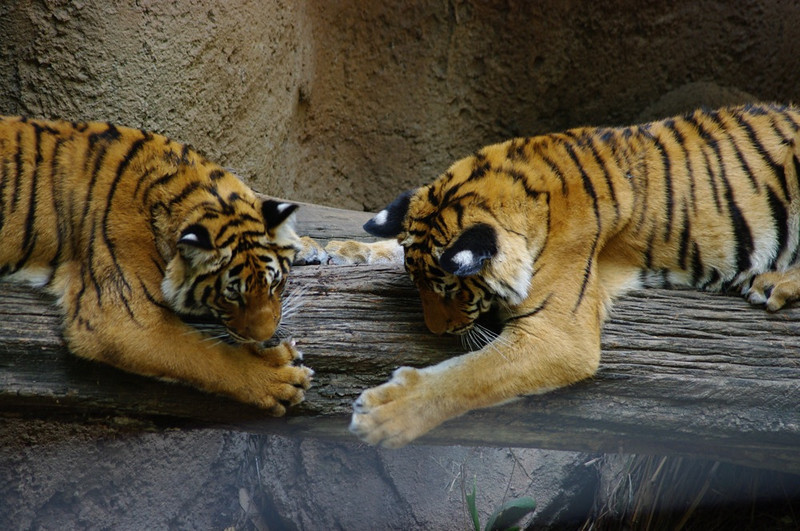 They jumped down to try to find it, and then the third cub joined in as well.

I thought it might be a good idea to post something other than pictures of tigers.  Here's one of a cactus plant that we spotted while wandering through the Cedros Street design district in the late afternoon last weekend.

Here are few images from the San Diego Botanic Garden in Encinitas this morning.  There are a bunch of sculptures scattered throughout the Garden.

The dragonfly skimming over the Lily Pond was one of my favorites.

This one was pretty good too. 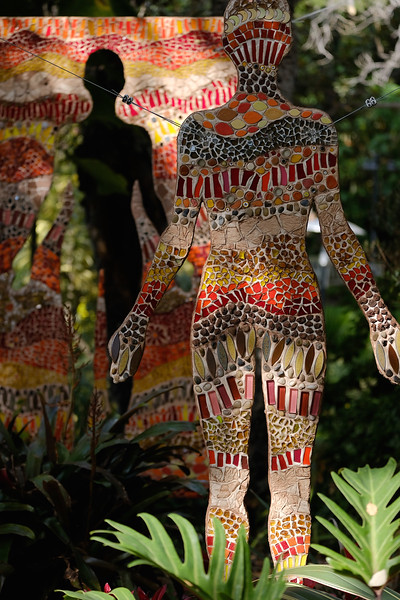 The topiary Mariachi band has been there for quite some time.

We didn't see any turtles in the Lily Pond this time, just this one frog who was sitting on the bank most of the time we were there.  Eventually he moved part way into the water.

Click here to see more images from this morning at the San Diego Botanic Garden (formerly known as the Quail Botanical Garden) in Encinitas, California.

We went for a little walk at Torrey Pines State Beach on Friday evening. 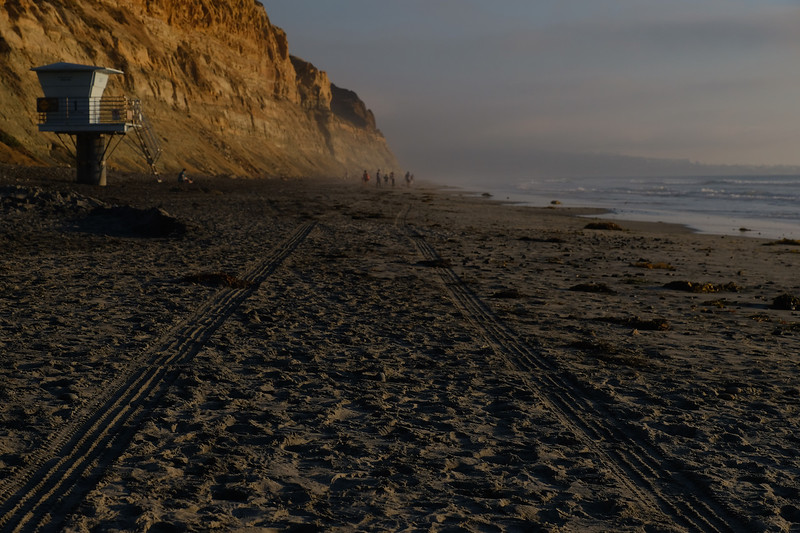 Click here if you would like to see a few more images.
Posted by Frank B. Baiamonte at 10:16 PM No comments:

Cinta and Berani - Malayan Tigers at the San Diego Zoo

I spent about 4 hours watching Cinta and Berani on Saturday morning.  They alternated between hanging out at opposite ends of the large habitat sort of watching each other (and from where I was standing, both often completely out of my line of sight) and chasing each other around and even playing in the pool together.  It was great fun to watch, even if most of the time I couldn't even see them.

Here's Cinta, on his way to take a swim.

Here's Berani, looking up the hill to see what his brother is up to. 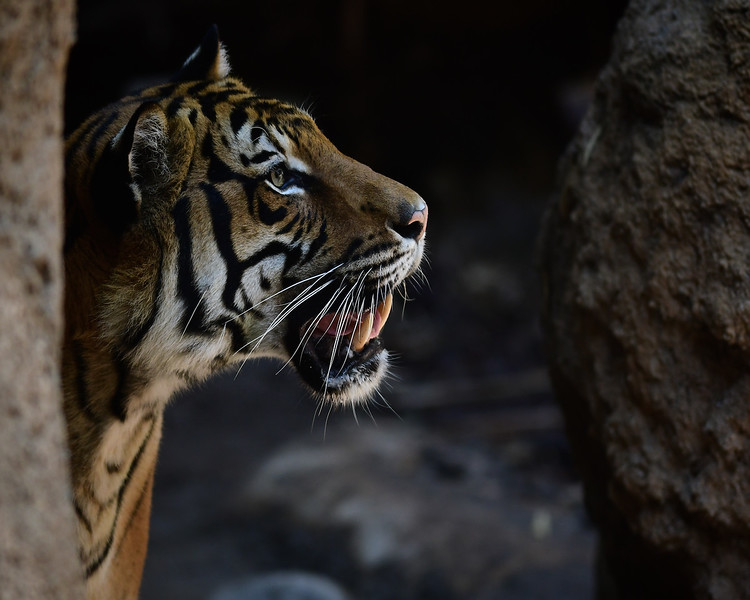 Several times during the morning they decided to chase each other around and wrestle a bit (or whatever it is tigers do when they're not really trying to hurt each other). 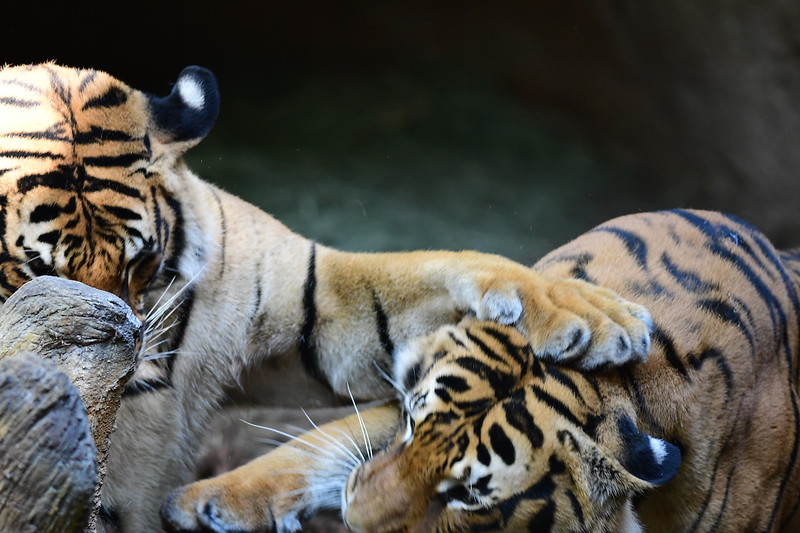 Click here to see a few more from Saturday, October 14 at the San Diego Zoo.

Penny the Snow Leopard got a slab of ribs for breakfast on Saturday morning at the San Diego Zoo.

There are three really noticeable things that happen at the San Diego Zoo during the month of October - really nice light because of the position of the sun in the sky; lots of kids, since October is "Kids Free Month"; and of course, pumpkins.  Lots of pumpkins.  All the animals get pumpkins to eat or play with, or both.

Cinta, Berani and Connor weren't the only ones to get pumpkins, even their little probably-not-so-distant-relative the Fishing Cat got one. 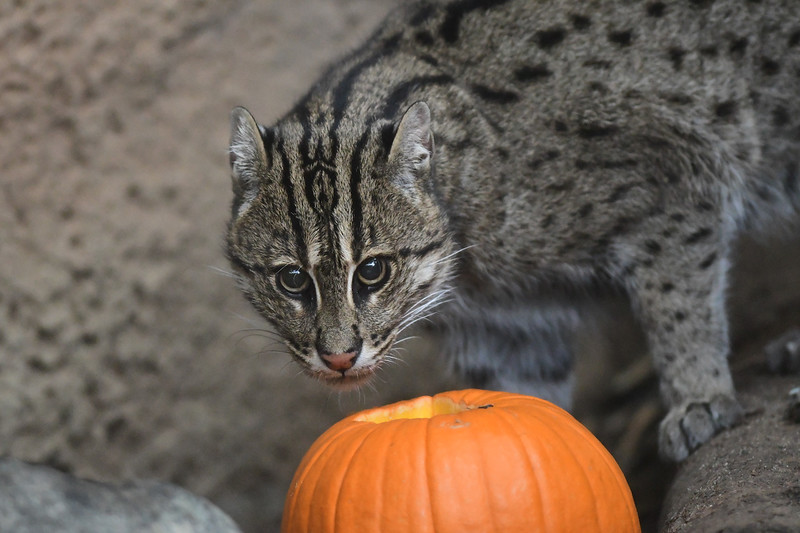 Click here to see more images of the Malayan Tigers and their pumpkins at the San Diego Zoo on Saturday, October 14.

Posted by Frank B. Baiamonte at 8:29 PM No comments:

Click here to see more.
Posted by Frank B. Baiamonte at 10:24 PM No comments: